Portugal’s visitor numbers have spiked to record highs as people discover its trendy city neighborhoods and remote windswept islands, museums and music, wine and beaches. The entry point to one of the hottest countries in the world now to visit is usually Lisbon, so here are some suggestions for how to spend three days in this beautiful capital city.

Start with the monuments in the Belém area, on the waterfront and surrounded by plazas and parks.

Hit the Belém Tower (Torre de Belém) when it opens and buy a combination ticket to the Jeronimos Monastery so you can bypass its ticket line when you go there later. A city icon, this intricately carved tower with turrets and balconies to explore was built between 1514 and 1520. Wear sturdy shoes as there are plenty of steps to get to the top, and the views are worth every step.

Follow the Tagus River toward the April 25 Bridge (Ponte 25 de Abril), which is visually very similar to San Francisco’s Golden Gate Bridge. It was built by the American Bridge Company, which actually constructed the San Francisco-Oakland Bay Bridge.

Portuguese navigators in the 15th and 16th centuries were the first to circumnavigate the earth (Ferdinand Magellan), reach India by sea (Vasco da Gama), and discover Brazil (Pedro Álvares Cabral), among other impressive feats. The massive yet elegant Monument to the Discoveries (Padrao dos Descobrimentos) celebrates these accomplishments and is located in the area where these adventurers set sail in small ships called caravels.

The design of the monument evokes a ship with Prince Henry the Navigator at the bow, leading the charge into the water. Not to overlook other contributors to Portugal’s prominence, likenesses of political and religious figures, artists and writers are all portrayed with clues as to their occupations. You can go inside and climb the monument–it’s a good vantage point to see the mosaic on the plaza that pays homage to the explorations.

Time for a snack break. The city’s renowned custard tart, pasteis de nata, is most famously produced at Pasteis de Belem. There’s a perpetually long line out front but it’s perfectly acceptable to bypass it. Walk in any of the doors on the street, find a table, and sit down. If there are no available tables in the front rooms, keep walking back–the restaurant is cavernous. A waiter will come by.

Across the street, the Jerónimos Monastery (Mosteiro dos Jerónimos) is a UNESCO World Heritage Site and a stunning example of Manueline architecture. Named for King Manuel I who reigned in the early 1500s, this lavishly ornamented architectural style incorporates symbols of the sea with religious, royal, and nature-specific depictions. Take your time walking through both floors, taking a close look at the stone carvings, relaxing in the cloisters, and soaking in the peaceful atmosphere once enjoyed by monks of the Order of St. Jerome.

When you exit, look for the entrance to the church Saint Mary of Bethlehem (Santa Maria Belém), which will be on your left. Entrance is free. Vasco da Gama spent his last night in the monastery before departing on his epic voyage to India so it’s fitting that his final resting place is in this church. Cardinal-King Dom Henrique, King Sebastião, and children of Manuel I are also entombed here. What you will remember after you leave though is the height of the nave’s vaulted ceiling, which reaches nearly 100 feet.

Next stop is Rua Augusta, a lively street with cafes and stores, for a late lunch and a walk around the Baixa district. Stroll along the wide avenues, admiring Baroque architecture and handsome plazas, and then continue to Alfama, the city’s oldest neighborhood. Explore the winding medieval streets and see sights like St. George’s Castle (Castelo de Sao Jorge) and the Lisbon Cathedral (Sé de Lisboa). Coffee shops, bakeries, clothing stores, bars, cafés, churches, and restaurants will happily occupy you until it’s time for bed. Take the famous Tram 28, which is a low key way to sightsee in this hilly area, in the evening when it’s not so crowded. 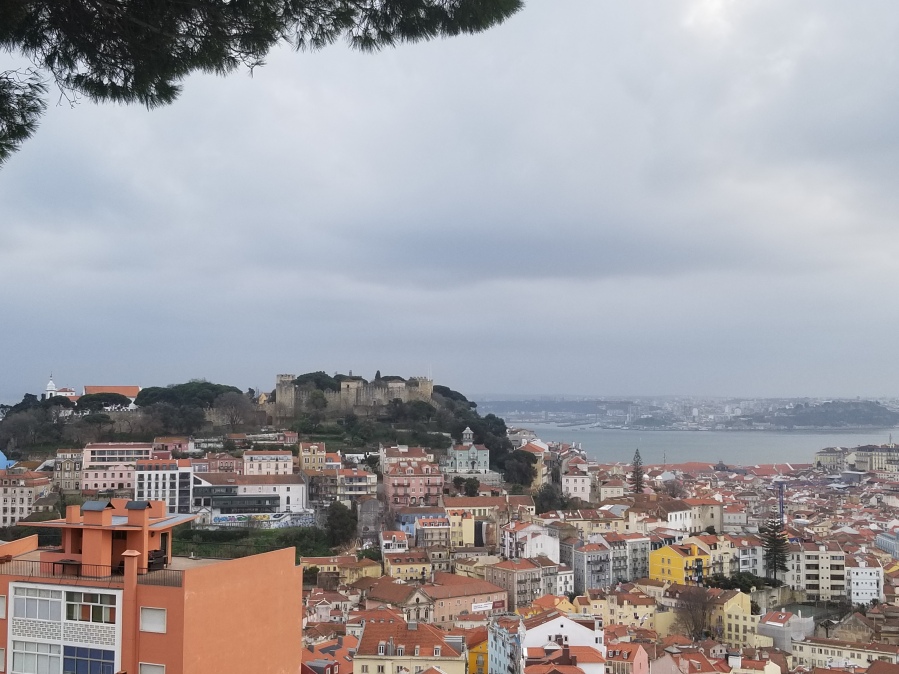 In Sintra, about 45 minutes from Lisbon, Pena Palace (Palácio da Pena) is a castle on a hill surrounded by walking trails and gorgeous gardens. Plan on spending an entire day here between transit time (in summer travel time can double), touring the castle, and exploring the grounds. 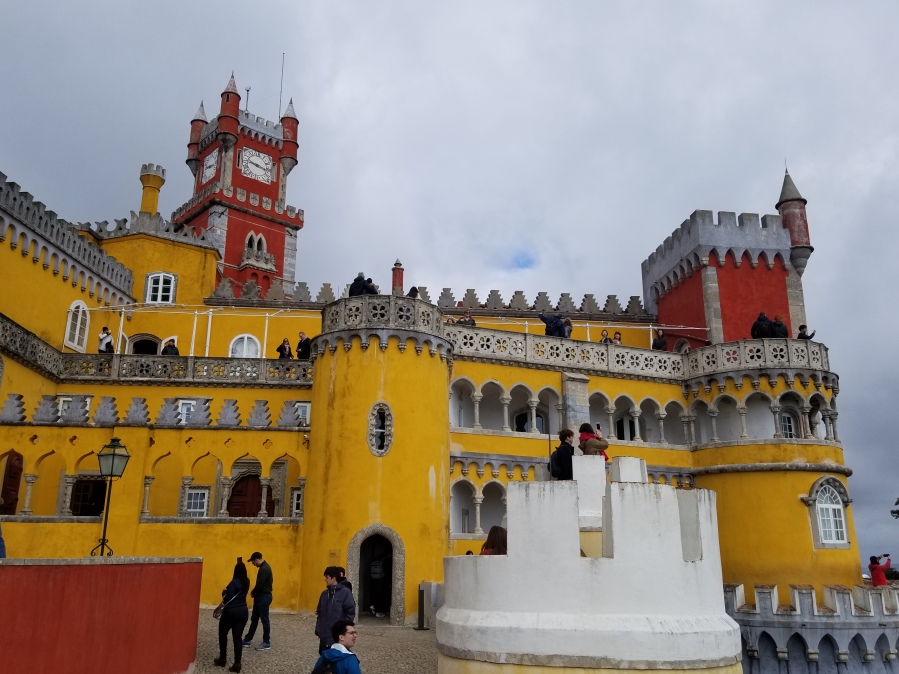 In 1838, King Ferdinand II acquired a defunct Manueline monastery dating to 1511. He enlarged the rooms and added vaulted ceilings and a new wing to his new royal summer palace. This patchwork structure is the stuff of fairytales: battlements, watchtowers, gargoyles, statues, intricately patterned tiles, vibrant colors, eclectic décor, sweeping views, and a drawbridge. The park and gardens are equally romantic with lakes, bridges, pergolas, fountains, and 500 species of trees. It is possible to explore the park and gardens on horseback, a bicycle, or a horse-drawn carriage. There’s a café at the palace or you can pack your own lunch or eat in the town of Sintra.

There are other castles in Sintra, an incredibly charming town with a host of small inns, so spending more time here will be enticing to people who love castles and walking. Two options are the 18th-century palace hotel Tivoli Palácio de Seteais with views of Pena Palace; and the Tivoli Sintra Hotel in the center of town.

Follow your interests on Day Three. Culture lovers could visit museums including Museu Nacional do Azulejo, dedicated to the country’s gorgeous azulejo tiles; Museu Coleção Berardo, an impressive and free modern art museum; and the Museu Calouste Gulbenkian, whose comprehensive collection extends from Egyptian artifacts to Rembrandt. A quirky pick is the Museu Nacional das Coches, where you feel transported to a different age among scores of elaborately decorated horse-drawn carriages spanning the 17th to 19th centuries. Speaking of quirky, there are museums dedicated to money, water, Freemasons, and puppets as well.

Foodies could take an Eating Europe walking tour that includes a taste of slow-cooked beef at a fado restaurant, a Portuguese-style samosa washed down with an African beer, and a fish specialty paired with a local sparkling wine. Along the way, your guide will discuss the history of the Baixa and Mouraria districts and point out engaging street art.

Modern architecture buffs and those traveling with children might want to check out the newer area of the city called Nation’s Park (Parque das Nações), which was built for Expo `98, a World’s Fair celebrating the 500th anniversary of Vasco da Gama discovering the sea route from Europe to India.

Those with kids will focus on the aquarium (Oceanarium) and a science museum called The Pavilion of Knowledge (Pavilhão do Conhecimento). The Vasco da Gama Shopping Centre is a mall with kid-friendly dining options, a playground, and movie theater. When you need a rest, ride the cable car over the park.

Golfers have a lot of options but one in the Lisbon area that stands out is the Robert Trent Jones-designed Troia Golf Championship Course. Beautifully situated on the Troia Peninsula, it has water and mountain views.

Not far from Lisbon, Cascais is an attractive seaside town known for its waterfront cafes and bars, mosaic-paved pedestrian shopping streets, and area beaches.

Of note to gamblers, the Lisbon Casino (Casino Lisboa) is at the edge of the Parque das Nações and Casino Estoril is about a half hour from the city in a seaside resort setting.

Two boutique hotels that pay attention to design are part of the same company. Memmo Alfama updates 19th-century buildings with contemporary furnishings and a soothing color palette, and has a destination-worthy outdoor bar; Memmo Príncipe Real offers a free daily tour of its trendy neighborhood that is not well known (yet).

Also in Príncipe Real, the elegant and tiny Casa do Príncipe has the original hardwood floors, molding paneling, frescoes, and 13-foot ceilings of its 19th-century building, yet is decidedly unstuffy.On a hill with great views in the city center, the large Four Seasons Hotel Ritz Lisbon is known for its contemporary artwork and open-air rooftop fitness track.

If you are traveling with kids or just want some extra space, consider Martinhal Lisbon Chiado Family Suites, a centrally located apartment hotel with a kid’s club and a family-friendly cafe.

With its modern design, Myriad by Sana Hotel fits in perfectly to the Parque das Nações neighborhood. Abutting the Torre de Vasco da Gama, this is a good choice for returning visitors who want to get to know a new area, be removed from the congestion of the city, or anyone desiring proximity to the casino, Oceanarium, or other area attractions.

3 thoughts on “A Long Weekend in Lisbon”