I had always wondered how renowned architect Philip Johnson handled the bathroom in his groundbreaking (1949) Glass House in New Canaan, CT. The small circular bathroom, which includes a toilet, sink, and shower, is enclosed and covered in blue-green mini tiles.  It is so unobtrusive that I had to hunt for it.

Operated by the National Trust, the house is open for tours May-November and you must book in advance.  There are different options and costs for tours; mine, in October 2015, was $50 and lasted two hours. Tours restart May 1 and bookings are being taken.

A real convenience for NYC dwellers and those on the MTA line, tours start from a location across the street from the New Canaan train station, and right in the downtown area that’s lined with stores and restaurants.

Bathroom from outside the house 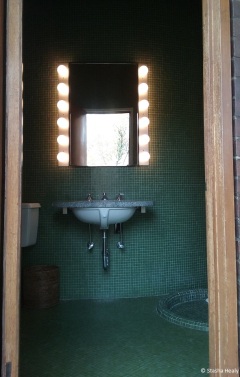 Sink in the bathroom 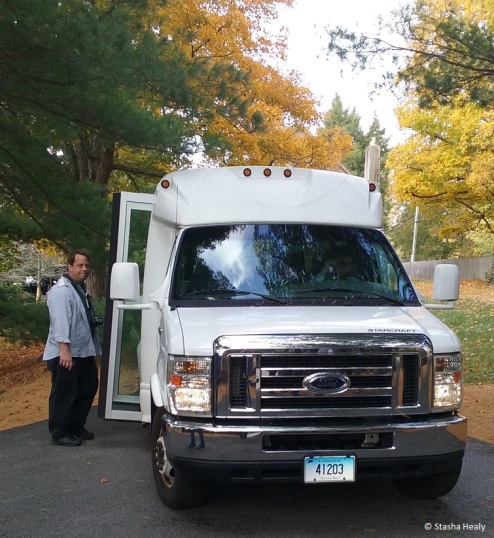 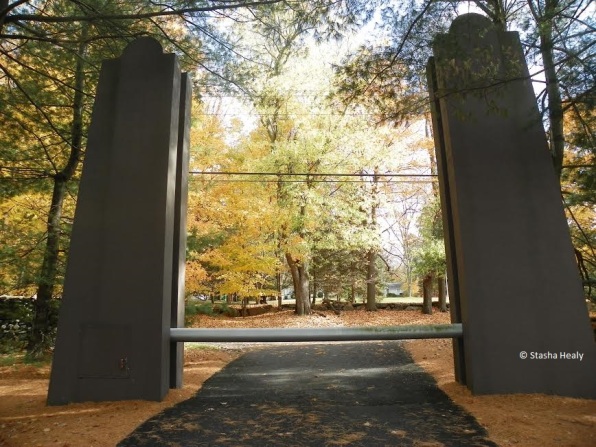 Entry gate: The bar moves up and down 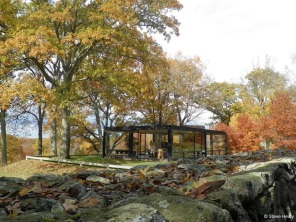 Approach to the house 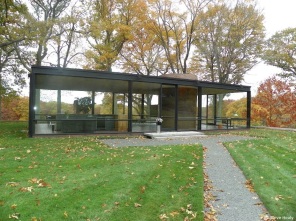 See how beautifully the house blends with its environment 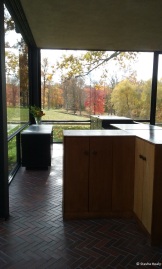 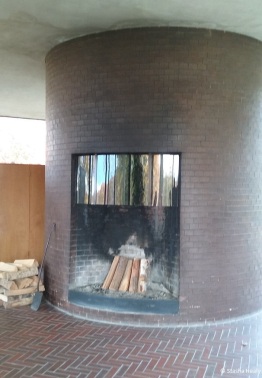 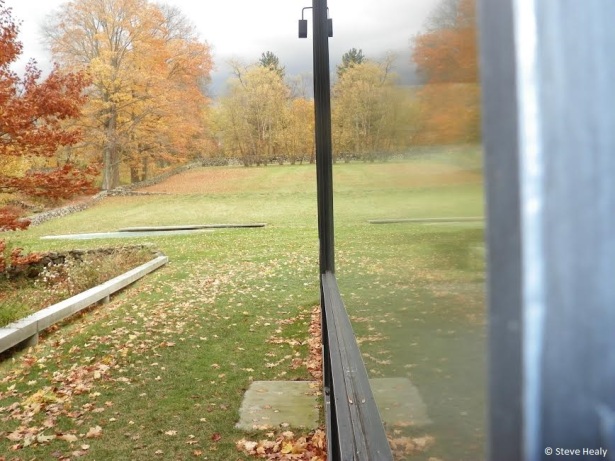 Reflection at the entrance

Desk from outside the house

Pond with pavillion and sculpture 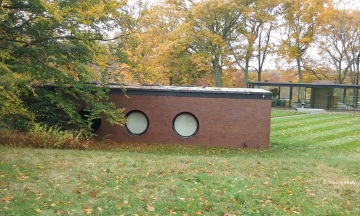 Entrance to the bunker-like painting gallery

Inside the painting gallery, which has changing exhibits. This one was of Johnson’s Lipstick Building in Manhattan 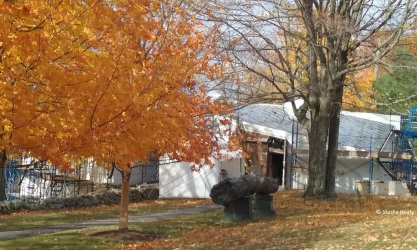 Pine needles on an ancient stone wall by Da Monsta

Doormat in Da Monsta follows the shape of the door 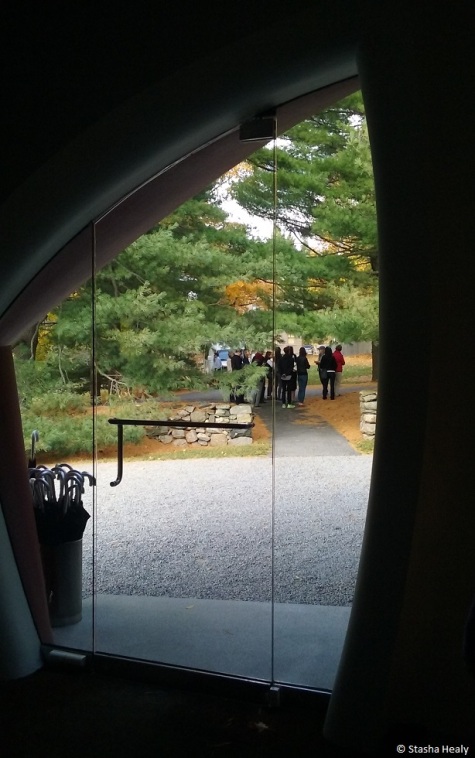 From inside Da Monsta

We drove and parked in a municipal lot two short blocks away. I pre-booked the parking pass ($4) when I bought the tickets online a week in advance. (It’s a good idea to book as far in advance as possible though as tours sell out.) I was frantic that we would miss the mini-bus to the house since we arrived two minutes after our tour start time, but the staff is on top of who’s where and our small group amused ourselves by browsing in the small design store and viewing the video exhibits (my favorite was a flip through Johnson’s Rolodex) until everyone checked in and used the facilities—once on site at the grounds of the house, there’s only one building with a bathroom and it is some distance from other buildings. We departed about 15 minutes after the start time of the tour. The drive from the tour start location to the grounds of the house is fewer than 10 minutes.

It is stunning in a simple way and made me want to go home and throw out all my clutter. This is my explanation of the layout going counterclockwise: The kitchen is to the left upon entering; the dining table behind it. Both share space with the living area, in the center.  To the right of the living area, a long wardrobe which ends at a fireplace near the door separates the bedroom. No pillows! The bathroom is near the bed and a desk. The house is 1,815 square feet: a mere 55 feet long and 33 feet wide. The open floor plan was revolutionary at the time.

I had not realized that in addition to the Glass House the tour included other buildings, most notably an art gallery that looks like a bunker.  The separate sculpture gallery was under construction but a short video of Johnson discussing his sculptures was most delightful.  There’s also a guest house, which unfortunately is so moldy that no visitors are allowed inside. We were shown photos. We peeked inside the sculpture-like building affectionately referred to as Da Monsta  and gazed across the rolling lawn to the mini-castlesque building Johnson’s housing study, and beyond that to the tiny Ghost House, which Johnson created because he was bored looking at just trees from his study.

It had never occurred to me the extent that Johnson might have orchestrated his 49 acres. He carefully planned the water features, digging out a pond; he cut trees and built bridges. The house is on a high shelf of a hill overlooking the pond, which is adorned by a magnificent pavilion that is technically an island and was designed at a not-normal scale so that tall people have to crouch. Its design is reminiscent of Johnson’s New York State Theater at Lincoln Center and it unfortunately was not open to my tour. Also by the pond is a 30-foot sculptural tower dedicated to Johnson’s friend from their Harvard days, the poet and partner of George Balanchine in the New York City Ballet, Lincoln Kirstein.

We ate at Chef Luis and while it was perfectly acceptable we would try somewhere different next time. The mussels in Thai curry sauce with garlic toasts was flavorful and the trio of tacos did their job showcasing different ingredients but the menu was uninspiring and I’ve seen generally the same decor in countless other establishments.

One thought on “A Visit to the Philip Johnson Glass House”